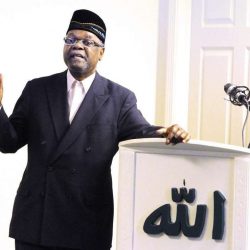 Janaazah Service for Imam Dr. Abdul-Majid Karim Hasan will begin at 11:00am on Wednesday, November 6, 2019 at Colonial Funeral Home, 86 Circular Avenue, Hamden, CT. Condolences may be expressed at www.colonialfunerals.com

Imam Dr. Abdul-Majid Karim Hasan, age 83, died peacefully at home in Hamden, CT on November 4, 2019. Born on April 11, 1936 in Kingstree, SC to the late Newton and Larl Nesmith (Amida Hasan) McCullough.  He was 1 of 13 born to the union.  At the age of 3, his family moved to Hartford, CT. Dr. Hasan received his early education in the Hartford, CT public school system. He received his high school (GED) equivalency in the United States Air Force from the University of Maryland. He served in the United States Air Force achieving the rank of Airman 1st Class and was honorably discharged.  He earned his B.S. in 1980 and M.S. in 1982 in Human Services from New Hampshire College in Manchester, New Hampshire. He attended the University of Massachusetts at Amherst, Massachusetts pursuing a Doctorate in Education (Ed.D.), completing all of the course work; however, he had to return to New Haven, CT to care for a growing and demanding Islamic community.

Dr. Abdul-Majid Karim Hasan was Resident Imam of the Abdul-Majid Karim Hasan Islamic Center and Director of Education for the Clara Muhammad School in Hamden, CT. He held these positions since 1971. Dr. Hasan was also Consultant of Islamic Affairs to the Department of Corrections, State of Connecticut, and was with the Department of Corrections since 1978.

Dr. Hasan was a man of peace.  He was a quiet observer.  He was an avid reader and a continuous learner.   His library was full of books on a variety of topics.  He constantly took notes on 3×5 index cards in his neat handwriting. Education was so very important to him and he instilled the love and the need to continue learning into his children. Dr. Hasan was also a long time saxophone player. He strived for excellence, not perfection, in everything that he did.  Pat Riley said, “Excellence is the gradual result of always striving to do better” and Dr. Hasan did just that.  The world is a better place because of him!

Dr. Hasan is the author of the book Reflections on the Islamic Teachings of Imam W. Deen Mohammed.

Janaazah Service for Imam Dr. Abdul-Majid Karim Hasan will begin at 11:00am on Wednesday, November 6, 2019 at Colonial Funeral Home, 86 Circular Avenue, Hamden, CT. Condolences may be expressed at www.colonialfunerals.com