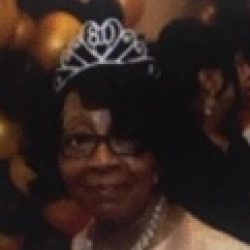 A celebration of Annie’s life will be held on Friday November 22, 2019, at The First Church of God, 90 Harper Avenue, New Haven at 11am. Viewing in Church from 9-11am. Interment will be held at Beaverdale Memorial Park.

Annie L. Willoughby Cummings is a native of Darlington, South Carolina. The daughter of the late Wade and Marie Willoughby. She is the first of three children, born January 12, 1937. Annie was educated in Darlington, S.C. public schools and graduated as class valedictorian from Mayo High School in 1955. Annie also attended South Carolina State College in Orangebury, S.C.

Annie migrated to New Haven, CT in 1956 and became a pioneer of First Church of God, pastured by the late Rev. Jacob Greene. She served as First Sunday School Teacher, Member of the senior and hallelujah choirs and President of the First Church of God Benevolence Committee.

Along with her husband, Pastor Emeritus Cummings, they faithfully attended numerous preaching engagements, encouraging others to love one another. Pastor Emeritus Cummings also served as: Sunday School Teacher and Superintendent at the same time, President of the Male Choir, First member of the Youth Fellowship, First secretary of the Men’s Auxiliary Board and He was installed as Pastor on June 23, 1996.

Annie accepted the Lord as her personal savior at age sixteen and was baptized at Cherry Grove Baptist Church by the late Rev. H. Dupree. Annie became a member of the Church of God Mission in 1957, founded by the late Bertha Jacobs.

Annie was a very considerate and loving person. She was a praise maker and loved and encouraged everyone she met. She worked as a supervisor of the New Haven YMCA for over 10 years. She received many awards, some of which include: Women of leadership of CT, Partner and supporter of fee the children, since 2000. She had over a dozen children. Received an award for supporting the homeless and battered women and children. She received numerous recognitions from the rent-a-space program from the City of New Haven, where she was considered as having one of the best gardens in New Haven, presented by the former Major, John Daniels of New Haven, CT. She was also recognized by the New Haven Police Dept and Yale University of New Haven.

A celebration of Annie’s life will be held on Friday November 22, 2019, at The First Church of God, 90 Harper Avenue, New Haven at 11am. Viewing in Church from 9-11am. Interment will be held at Beaverdale Memorial Park.