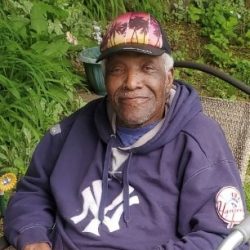 A celebration of Clarence’s life will be held on Monday, July 18, 2022 at Colonial Funerals, 86 Circular Avenue, Hamden at 12pm. Viewing in Colonial from 11am-12pm. Condolences may be expressed at Colonialfunerals.com.

Clarence Smith,80 of New Haven, entered internal peace on July 9, 2022, surrounded by his loving family members. Clarence one of nine children was born June 16, 1942, in Eufaula, Alabama to the late Johnny Lee and Mary-Anna Smith. Clarence would later relocate to New Haven, CT, where he would settle for over 50 years. Where he also met his loving wife of almost 50 years. While living in New Haven, Clarence was employed at Good Year. Clarence also had a passion for fishing all over New England with his loving wife Virginia.

Clarence was a loving husband, father, grandfather, brother uncle, cousin, and friend. He will fondly be remembered by those who knew him as a loving, giving, and a man of integrity, and wisdom. He genuinely loved giving the history of his “hometown” of Eufaula Alabama.

The passing of Clarence will leave a permanent ache in the hearts of those who knew and loved him. Clarence leaves to cherish his memories, His loving wife of over 50 years Virginia Smith, two sons Clarence Smith Jr., Darnell Morton, stepchildren Tyrone, Anthony, Debbie, 24 grandchildren and 36 great grandchildren and 1 great great grandchild one brother Johnny Lee-Smith(Helen), Windsor, CT and one Sister Mary Smith-Turner East Windsor CT and a host of nieces, nephews, cousin and friends.

A celebration of Clarence’s life will be held on Monday, July 18, 2022 at Colonial Funerals, 86 Circular Avenue, Hamden at 12pm. Viewing in Colonial from 11am-12pm. Condolences may be expressed at Colonialfunerals.com.