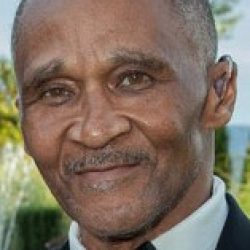 The funeral service will be held on Monday, February 3, 2020 at 11 A.M. at Christian Tabernacle Baptist Church, 425 Newhall Street, Hamden. Reverend Shelly Holness will officiate. Visitation will be from 10:00 A.M. to 11:00 A.M. at the church. Interment will immediately follow at Beaverdale Memorial Park. Clark was born in Derby on August 25, 1957. He graduated from James Hillhouse High School in 1976 and went on to attend Graham Junior College in Boston and the University of New Haven.

Clark worked for Geometric Tool, Inc. before working for the State of Connecticut Board of Education for the Blind and then Southern Connecticut State University. He retired in 2018.

Growing up in Brookside, affectionately called “Out The Way,” Clark, also known as “Tuck,” was involved in many activities. He played sports in the neighborhood and was on the basketball team for St. John the Baptist. He was known for his odd collection of “pets,” including a fox he adopted at the nature center and the snapping turtle he brought home and put in the bathtub. He was a member of the Boy Scouts and the Boys Club, where he was an avid swimmer.

Clark was a voracious reader and never without a book. Clark loved to dance and could still cut a mean hustle. He enjoyed a close relationship with his mother, was a proud father of four children, and “Pop Pop” to two granddaughters, whom he often cared for in his home. He loved to watch sports, especially baseball and football. He was a passionate New York Giants fan and enjoyed trash-talking on Facebook with fans of other teams. He was looking forward to the Super Bowl. In addition to his reading and sports passions, Clark was a great cook. He was known for his fried chicken and Spanish rice. Clark had a great sense of humor and a hearty laugh that will be sorely missed.

Clark was preceded in death by his father, William I. Tucker Sr. and granddaughter, S. Ashley Sudduth.

In lieu of flowers, donations to the family may be sent to Lauren Tucker, 38 Collins Street, 1st Floor, Hamden, CT 06514, or sent electronically via CashApp $ttuckerpay or PayPal tteemail100@gmail.com.

The family of Clark David Tucker wishes to thank you for your generosity, thoughtfulness, and support at this difficult time.