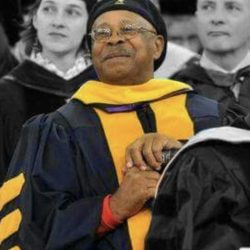 A celebration of Clifton’s life will be held on Tuesday September 12, 2017 in St. Matthew’s UFW Baptist Church, 400 Dixwell Ave. New Haven at 11:15am. Viewing in Church from 10-11am. Interment will be at Beaverdale Memorial Park. Condolences may be expressed at colonialfunerals.com.