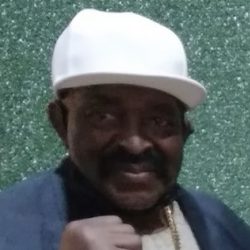 On January 16, 1945, Diego Robinson was born in Parmele, North Carolina, to his late mother Evelyn Robinson and his
late father Robert Junior Barnhill. Eastend High School can
be found in Robersonville, North Carolina, where Diego received his formal education. Diego, better known in his
Boxing days, by the ring name “CHAMP”. In addition to that,
he was a passionate truck driver for many years and traveled
all over the world. Deigo Robinson is survived by his siblings Carolyn Banks, who resides in Hamden, Connecticut, and Lula Alston, who resides in Greenville, North Carolina. Diego leaves behind five nephews and one niece. Loving Cousins Helen Brown, Vivian Robinson, and Jackie Jackson held a special place in his heart. Tim Witherspoon, Tina Bennett, Tony Jordan, and Percy Thornton were some of his devoted friends. Along with a host of cousins, nephews, and friends.
He was predeceased by his parents, Evelyn Robinson and Robert Junior Barnhill and his sister Joyce Banks.