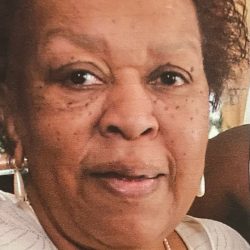 A celebration of Elizabeth’s life will be held on Thursday September 8, 2022 at Colonial Funerals 86 Circular Avenue, Hamden CT at 12pm. Viewing in Colonial from 11am-12pm. Interment will follow at Beaverdale Memorial Park. Condolences may be expressed at Colonialfunerals.com.

Elizabeth Peachie Taylor who prefers to be called “ Liz “ was born July 16, 1938 in Virginia. She was called to heaven August 29, 2022. She was the only child of Rachel Taylor. She and her mother moved to New York City where her mom was offered a job as a Nanny. Liz would tell her family stories of how exciting it was living in New York City and all the experiences she had. After a few years Liz and her mom moved to New Jersey with her Grandmother where Liz had her First child Bonnie Taylor. After the passing of her mom, Liz moved to CT while pregnant with her second child Connie Taylor.

Liz worked long hours at Firelight Factory for many years, Also as a caregiver for the elderly, live in nanny and a Headstart teacher. For many years she worked two full time jobs and one part time job to provide a good life for her children and to afford sending them both to private catholic school. Though she worked extremely hard on her days off she liked to have friends over for drinks, food, card games, music and a good time. She loved listening to Barry white, Pattie Labelle and Aretha Franklin. She would dance around her house and sing along to the music. On Sundays she would attend St. Martins church. She had a strong belief in god and prayed for herself, family and friends all the time. One of her favorite prayers was “The lords Prayer”. She enjoyed watching movies. Some of her favorites were dirty dancing, pretty woman and tons of lifetime movies. She was always updated on the news and would tell her family everything going on in the world.

Liz had a heart of gold and would do anything for her family and friends. In her current senior complex she was known as the “Loan Shark” she would loan people money and keep track of it in her notebook. She always said “I’ll loan the money but if you don’t pay back, they’ll never borrow again” they would pay her back with interest. Liz had multiple hiding spots in her house for money. Not every dime went to the bank.

Liz family and friends were her happiness. She would love going out with them shopping, weekend trips to different places, Casinos and just spending quality time. Her daughters and granddaughter Shavon would call her multiple times a day to talk about any and everything. She would talk to her best friend Sheila Stiles who she’s known over 60 years every Sunday and look forward to the call. Her and Sheila were members of St. martin de porres church in New Haven CT. Liz best friend was also her granddaughters God mother. Liz never missed a Birthday for anyone she cared about. She would make sure you were given a card with money and added change for the age you turned. She would take her time and pick the perfect card. Liz had a special relationship with each of her family members and friends and her passing will change their lives forever.

Connie was her outspoken feisty child. Liz always said” Connie gave her a run for her money”. Liz and Connie were so much alike sassy attitudes, extremely impatient, friendly, lovable and appreciative. Liz would call Connie about a problem she was having and Connie would be ready to “fight and go to jail” for her mom. Connie and Liz would talk on the phone everyday at 11a and make jokes about all types of things. Their love language was laughing together.

Bonnie was the oldest child and Liz would call her “The Boss”. Bonnie would take Liz to her medical appointments, shopping and anywhere else she wanted to go. Liz enjoyed spending time with her daughter and requesting special meals for her to cook. Liz loved jewelry and was gifted a gold cross that she wore until the moment she passed. They would talk on the phone every day at 9:30am on the dot. They would laugh and even crying together. Liz was all her loved ones counselor. Bonnie and Liz had a unbreakable bond.

Her granddaughter Shavon met the world to her. She would always say “Von your a good person, Good things are going to happen to you and I hope I’m here to see it” They would laugh and make jokes with each other all the time. Liz would give Shavon envelopes that said “I love you Boo” with money inside just because she loved giving. They would Go for rides to her favorite stores, Feed the swans in West Haven, out to eat , buy lotto tickets and something they enjoyed most other than being with each other was a cold Colt 45. Shavon would call Liz “Nana” or “My Boo” the bond they had was Pure Love. Liz called Shavon every morning by 730a to wake her up for work. She would say “ Von you up?, Don’t go back to sleep” After each call Shavon would fall right back to sleep. She never told Liz this because she just wanted to hear her voice every morning. At the end of every call they would say Later. Liz didn’t believe in saying goodbye.

Liz had some important men in her life as well. Leonard Bonnie’s husband who she has known over 30 years. She would call him “Lenny” She always treated him like her own son and shown genuine love and compassion for him. She also has a special place in her heart for Melvin “Mel” who has been in her life for over 21 years and Nosha over 14 years. All these men would bring a smile to her face and she enjoyed having conversations with them, Cooking them her famous meatballs and using them to move heavy things around her house. She was like a second mother to them.

Liz had a life filled with love and her legacy will be continued through her family. She has instilled Values, Memories, Independence and strength that will encourage healing to move on in life because her family know she will be watching over them every step of the way. Liz always said “Time waits for no one”. I want everyone to remember when you hear the name Elizabeth Peachie Taylor, understand that she was a superwomen who will always be loved and never forgotten.

A celebration of Elizabeth’s life will be held on Thursday September 8, 2022 at Colonial Funerals 86 Circular Avenue, Hamden CT at 12pm. Viewing in Colonial from 11am-12pm. Interment will follow at Beaverdale Memorial Park. Condolences may be expressed at Colonialfunerals.com.