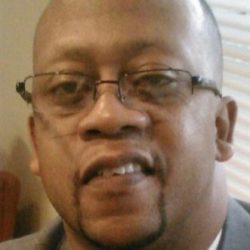 A celebration of Eric’s life will be held on Monday, December 2, at Christ Chapel New Testament Church , 220 Dixwell Avenue , New Haven at 11am. Viewing at 8-11am, followed by interment at Evergreen Cemetery.

Eric S. Jones Sr., 54  was born in New Haven, CT on October 27, 1965 to Jettie M. Jones. He departed this life and entered into eternal rest on Thursday, November 21, 2019 in Waterbury, CT. Eric attended the Hamden Public School System where he graduated from Hamden High School and later received his Bachelor’s Degree in Communications from Southern Connecticut State University. Eric later decided to pursue a career as a police officer and joined the New Haven Police Department in 1992. He dedicated 20 years of his career to the New Haven Police Department and worked tirelessly to support the community. During his career, he served in the auto task force, narcotics unit, and ended his career as a school resource officer at Hillhouse High School. He retired from the NHPD in 2012. Eric loved the Lord and enjoyed serving the ministry in many capacities. He believed in God’s word and instilled many of those teachings into the lives of his children. Eric was a devoted father to his three children; Misty D. Jackson, Eric S. Jones Jr., and Kyah L. Jones. He was a family man who enjoyed talking and spending time with his family. To know Eric was to love him. He had an amazing heart and a kind spirit. He was always willing to impart the knowledge and extend a helping hand to whomever was in need of it. Eric leaves to cherish his memory, his beloved children; Misty D. Jackson (Rick), Eric S. Jones Jr., and Kyah L. Jones. His mother; Jettie M. Jones, Father; Roger Bowers. Siblings; Sam W. Jones Jr., Onsylo J. Jones, and Roger W. Bowers. A special niece, Jasmin D. White and a host of other relatives and friends. Eric was predeceased by his grandparents; Booker T. Dawson & Lillie Felder Dawson. His father; Samuel W. Jones Sr. Siblings; Linda Bowers, and Glen N. Bowers. Eric was loved by many and will be greatly missed.

A celebration of Eric’s life will be held on Monday, December 2, at Christ Chapel New Testament Church , 220 Dixwell Avenue , New Haven at 11am. Viewing at 8-11am, followed by interment at Evergreen Cemetery.