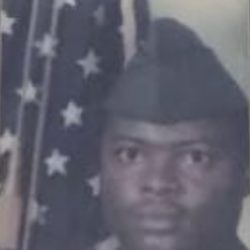 A celebration of James’s life will be held on Friday June 17, 2022 at 11am at Colonial Funerals, 270 West Main Street Waterbury. Viewing in Colonial from 10-11am. James R. Sanders, Funeral Director. Condolences may be expressed at Colonialfunerals.com.

James Arthur Martin was born March 15th, 1965 to the late Clara Bell Martin-Young (Cotton) and Arthur James “Peter” Martin (both whom preceded him in death).  He was born and raised in Meridian, Mississippi where he lived with his late parents and three other siblings, two of which preceded him in death (Katherine “Kathy” & Bonnie “Lois”).

After three years of living in Mississippi, James’ journey began…The family relocated to East St. Louis, IL up until the year 1977, when they had taken up new residency in Mount Vernon, NY.  James and his siblings were schooled there for a short period of time during their tenure.  Growing up, he was no stranger to the christian environment.  The entire family had joined Mt. Vernon Baptist Church under the guidance of Reverend Randolph Radcliff, where James was an active member of the church choir.  Some time later, James and his family decided to return to Illinois, where they elected to continue their fellowship with Christ, at the Ninth Street C.O.G.I.C. under the leadership of the late Pastor Edmond C. Collins.  James remained active in the church choir, as well as, the singing group they formed amongst himself, his sister (Ronk) and three other cousins (Tammy, Dennis & Traci).  They called themselves, “The Cotton Five”, in honor of their late grandmother (Della Cotton), representing their theme song, “We Come This Far by Faith” (which is what James has truly done).

James continued his schooling at Clark Jr. High School and later completed his educational studies at East St. Louis Sr. High School, known as the “Home of The Flyers”, (one of the only two high schools in the area).  Throughout his school years, James was quite the athlete.  He was very active in sports, track & field and mainly, football. During his football career, he was, the “King of The Field”, as “Half-Back #24”.  His amazing talents on the field, would land him a Football Scholarship to Southern Missouri State University in Springfield, MO.  Upon graduating from high school in May, 1984, James would further his education at SMSU for the next few semesters.  In 1985, he enlisted in the US Military Service, where he served as an Army Reserve Veteran for eight years.  During his years of service, he ranked as an E4-Specialist, until being relieved of his duties in 1993 with an honorable discharge.

Over the years, James had become acquainted with and conjoined ties with Lizette Cardoza, the mother of their three children (Michael “Mike”, Ashley “Monique” and Peter “PJ”.  James loved entertaining family & friends, as he was known to be, “the life of the party”.  He could take the stage and do an impression of a preacher, like no one else could (If you know him, you know exactly who we’re talking about).  You wouldn’t dare call him by his full name, (James Arthur); only his mother could do such a thing (that’s probably why he hated it so much, because he heard it so frequently).  Lets not forget, he loved his Gospel Music; but equally so, he loved the “Reggae” sounds of his favorite, pioneer, singer artist, Robert Nesta Marley “Bob Marley”.  If you don’t know, you better ask somebody.  Don’t sleep on James; because if you do, you’ll certainly get more than what you bargain for. Especially, if you’ve never heard the tunes of his snore…

Some would say, James had a heart of gold when it came to putting others’ needs before his own.  Even through the difficult times of trying to manage his failing health, as well as other hardships, James still had the strength to look after and care for his mom, while he was in IL (until her calling to glory). Even beyond those challenging times, he managed to carry his journey to the south, where he assisted with the care of his Aunt Nell in Cross, SC.

James would eventually return to his home in Waterbury, CT, where he would reunite with his children and especially his grandchildren, whom he could not wait to embrace.  Soon James would succumb to his illnesses and lose his “gift of life”.  He may have lost the battle; but not without a fight.

That first day of June, yet still too soon he reached his final destination.  While he could not appease all, he leaves to cherish, fond memories of admiration:  three children: Michaell (Zazz) of Orlando, FL;  Ashley (Joshua) of Waterbury, CT;  Peter  (US Military,  Army PV2 of Fort Bragg,NC.)  one sister: Veronica Martin-Bennett (Darryl, Sr.) of Wallington, NJ;  six grandchildren:  Harmony, Arianna, Faith, Joshua, Jr., Amelia and Isla, all of Waterbury, CT;  a host of nieces, nephews, cousins, extended family members and friends.

A celebration of James’s life will be held on Friday June 17, 2022 at 11am at Colonial Funerals, 270 West Main Street Waterbury. Viewing in Colonial from 10-11am. James R. Sanders, Funeral Director. Condolences may be expressed at Colonialfunerals.com.