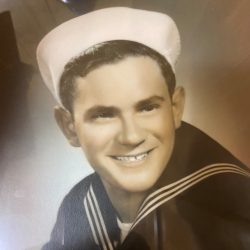 A graveside service will be held at the State of Connecticut Veterans’ Cemetery, 317 Bow Lane, Middletown, CT, on Friday, September 16th, 2022 at 1PM with full military honors. Condolences may be expressed at Colonialfunerals.com.

James J. DeStefano, known affectionately by most as Jimmy, was born in New Haven, CT on September 19th 1932.
James was always fond of his time as a youth as a member of the Boy Scouts of America, which led to a lifelong love of nature and the outdoors. His family has fond memories of camping trips where James would build a “boy scout” fire and recite scary stories.
James joined the Navy at the age of 19, during the Korean War, and served aboard the USS Chewaucan which had the dangerous task of transporting fuel to warships in the fleet and to remote Navy stations in the Mediterranean Sea. He received the National Defense Service Medal, Good Conduct Medal and the European Occupation Medal, and was honorably discharged in 1956.
James was proud of his 32 years of work for the Custodial Department of the New Haven Board of Education, where he made many friends and good memories.
James loved sports, baseball in particular, and was a huge fan of the NY Yankees. He was an avid reader, especially anything by Stephen King, and wrote poetry. He also enjoyed collecting ornate belt buckles, baseball cards, rare coins, and novelty pocket knives.
He was a beloved husband, father, and grandfather and will be greatly missed by his surviving family; wife Mary, sons Joseph and Nicholas, daughter Susan (deceased), and grandsons Dylan, Eric and Christopher.
A graveside S=service will be held at the State of Connecticut Veterans’ Cemetery, 317 Bow Lane, Middletown, CT, on Friday, September 16th, 2022 at 1PM with full military honors. Condolences may be expressed at Colonialfunerals.com.