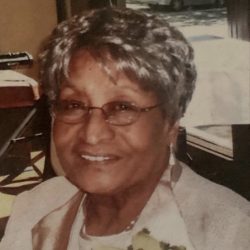 A celebration of Jane’s life will be held on Friday, April 22, 2022 at 11am at Mount Hope Temple, 555 Dixwell Avenue, New Haven, Ct. Calling hours in Church from 10-11am. Interment to follow at Westville Cemetery, New Haven. Condolences may be expressed at Colonialfunerals.com.

Jane Bernice Miller Peterson, known lovingly as “Mom Mom”, went to live with her Lord on April 7, 2022.  She passed away, peacefully, at her home on Bassett Street in New Haven, CT.  She was 96 years old.  Jane was born to Isaac and Marguerite Miller on June 3, 1925 at their family home in Hamden, CT where she grew up. She attended Newhall Street School and graduated from Hamden High School in 1945.

Following graduation, Jane was accepted to the Fashion Institute of Technology in New York, however, the war changed her career path and she went to work at Winchester Repeating Arms Company.

Jane married Harold Stevens Peterson on June 29, 1947.  The couple was blessed with four daughters, Carol, Lynn, Joanne and Kathy.  They made their first home in Hamden, CT, and later moved to the newly-built Brookside housing complex.

Along with her parents and sister, the couple purchased a home of their own on Bassett Street in New Haven where Jane continued to reside until her death. She spent many fulfilling years as a wife, mother and homemaker to her husband and children.  During these years, Jane took various educational courses which provided her with the skills to return to the workforce.

She worked as the secretary/receptionist to Dr. Wilbur Esdaile.  She then went on to work as a Child Care aide at the Newhallville Day Care Center, the first day care center in New Haven.  This position ignited her passion for childcare and motivated her to take professional courses.  Jane worked in many of New Haven’s Child Development Centers during her tenure, including the Hill, MLK, and Jefferson Street locations. After over twenty-five years, she retired as the Director at the Jefferson Street Center.

Jane loved working with her hands, enjoying hobbies such as knitting, crocheting and quilting, rug hooking, cross stitch, painting and jewelry-making.  She excelled at these crafts selling some of her wares while donating others. She, also, acquired and displayed a multi-cultural doll collection which was a source of satisfaction and pride. She was an avid reader who spent many hours reading a wide range of literature.  She enjoyed journaling and to keep her mind sharp did crossword puzzles and word searches daily.  Jane also enjoyed traveling with her family.  She was often seen with her sister, Peggy, shopping and riding the bus regularly. Because they were often together many mistakenly thought they were twins. In later years she enjoyed extended visits to Virginia to stay with her youngest daughter Kathy and her family.

Jane’s spiritual gift was that of a teacher which she used both in her professional and Christian life.  She taught Sunday school and other early childhood Christian education programs for more than 40 years! Jane loved to read and study her Bible, individually, with her family and in group settings, which she continued as she approached her 97th birthday.

Jane, truly, lived as a “Proverbs 31 Woman” and will be remembered for her kind, humble, and gentle spirit.

A celebration of Jane’s life will be held on Friday, April 22, 2022 at 11am at Mount Hope Temple, 555 Dixwell Avenue, New Haven, Ct. Calling hours in Church from 10-11am. Interment to follow at Westville Cemetery, New Haven. Condolences may be expressed at Colonialfunerals.com.