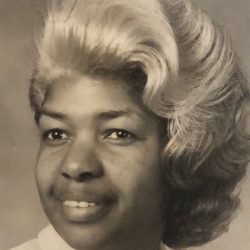 Viewing will be held Friday July 24, 2020 at Apostolic Community Church, 142-146 Center Street, Meriden from 9 AM to 1 PM and the
Home going service will be at 1 PM. Condolences may be expressed at colonialfunerals.com.

Pastor Judy H. Moss, 81, of Meriden CT, transitioned quietly in the midst of prayer, surrounded
by family and loved ones, on Saturday, July 18, 2020, in her home.  She was born to the late
Rev. Roland C and Rev. Emily Lucille (Punter) Hoffler on June 2, 1939, in Harlem, NYC.

Reverend Moss served faithfully as the Senior Pastor of Apostolic Community Church of Jesus
and Ministries in Meriden, Connecticut since November 1989, and Assistant Pastor for fifteen
years prior to becoming Pastor under the leadership of Rev. E.U. Hoffler-Parris. She committed
her life to Christ, her Lord and Savior at the age of 9, under the Leadership of the late Dr. Lulu
Jackson, Pentecostal Assemblies Church in Waterbury, CT, where she was baptised in Jesus
Name. She received the Holy Ghost at home with her mom and sisters, (Cleo &amp; Jean) on her
9th birthday.   She began preaching in 1969, and was ordained in 1985 by the Connecticut
District Council of the Pentecostal Assemblies of the World Inc.  Reverend Moss served as the
President of the Connecticut District Council Missionary Auxiliary.

Rev. Moss served as chaplain and prayer leader in the National Pentecostal Assemblies of the
World (P.A.W.) Women’s Auxiliary, Regional Director for the National Usher Board, Secretary
for the Evangelism Department of the Connecticut District Council of the P.A.W.   Always
civically involved, Rev. Moss served on several boards in the Meriden Community.
Always the philanthropist, Reverend Moss was the founder of both Global TEARS Ministries
and Women of Royalty.  Both were created to motivate and inspire others to achieve a higher
level of spirituality and self awareness.  Rev. Moss created, maintained and sustained a food
and clothing pantry and was a statewide leader in developing policy on client choice with the
Connecticut Food Pantry.  She was an incredibly talented and inspirational author, vocalist,
poet, and accomplished songwriter who also found time for family, travelling the world, baking;
she was renowned for her homemade cakes and sweet potato pies.

Pastor Moss was faithful to her family, her church and was first and foremost committed and
dedicated to God.

Viewing will be held Friday July 24, 2020 at Apostolic Community Church, 142-146 Center Street, Meriden from 9 AM to 1 PM and the Home going service will be at 1 PM. Condolences may be expressed at colonialfunerals.com.