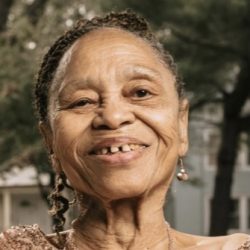 A celebration of Julia’s life will be held on Friday October 8, 2021 at 11am at Ebenezer Chapel, 50 Dwight Street, New Haven. Viewing in church from 10-11am. Interment will follow at  Beaverdale Memorial Park. Condolencesmay be expressed at Colonialfunerals.com.

Mother Julia Green Lane, 89, of New Haven, Connecticut, was called out of this earthly realm to be with the Lord on October 2, 2021. She was the widow of Gregory Lane (Cincinnati). On April 26, 1932, Julia was born in Florence, South Carolina, to the late Nathaniel and Melvina Sumter. She received her formal education at Wilson Public School in Florence County.

At a young age, Julia’s mom passed away, leaving her to the care of her older sister, the late Mary Graham. She quickly learned the ethics of working hard as a nanny and housekeeper, caring for various families in the Community. Families all over town heard of how good she was at what she did and wanted to hire her. It was even said that one family could not get their child to sleep at night without the special care of Julia.

​After spending most of her early adulthood in Florence, Julia relocated to New Haven, Connecticut, after her sister Carrie Lee Ritter for a fresh start. Here, she continued her journey and met the love of her life, the late Gregory Lane circa 1968. Gregory, a charming man, was able to ask her hand in marriage, and they became lawfully wedded in 1992. They continued to love and cherish each moment with each other until September 11, 2003, when Gregory departed this life.

Julia continued in her profession as a nanny and housekeeper in the City of New Haven. The families quickly caught on to her style and work ethic, making her a hot commodity to the families in the Greater New Haven area. In 1978 Julia started her career at Yale University in the housekeeping department. She always worked hard and received special recognition from Yale upon retiring after 17 years of service. Upon completing her tour at Yale, she carried her skills over to the entrepreneurial world and continued making house calls as a nanny and housekeeper.

Julia gave selflessly and tirelessly in ministry without any partiality. She served as a member of Sweet Hope Freewill Baptist Church under the leadership of the late Bishop Lee Parker and present Pastor Elder Lee Parker Jr. She was often found running the kitchen at church events as she served on the hospitality team. Julia also served as the treasurer for the church choir and as a singer on the Parker Gospel Chorale. She was loyal to her home church but poured herself into anything that was willing to help the less fortunate meet their needs. This included assisting her daughter Deborah Phifer with the soup kitchen at Agape Christian Center under the leadership of the late Dr. Mattie A. Darden. Julia would give to any and everybody. It wasn’t uncommon to see her opening her doors to individuals who didn’t have a place to stay. Many could give the testament that Julia gave them a little push along the way.

In the latter years of Julia’s life, she spent her time with those who mattered most, her grandkids. To them, she was Grandma Green, always comical and full of stories. Although she would tell the same stories repeatedly, each time she told them, there would be a new twist to it. Grandma Green spent plenty of time entertaining her grand’s and great grand’s as it brought great joy to her life. It wasn’t unusual to find her up dancing, singing, and pretending to cook in the kitchen in order to sneak snacks with her grandkids. While living with her special grandson Elder Aaron Guest, she started visiting Ekklesia Global Worship Assembly under the leadership of Bishop Randall C. Furlow. It was there that she sat back and marveled at the astute exegesis of the holy writ.

All those who knew Julia can attest to this one scripture, Acts 20:35, “It is more blessed to give than to receive.”

A celebration of Julia’s life will be held on Friday October 8, 2021 at 11am at Ebenezer Chapel, 50 Dwight Street, New Haven. Viewing in church from 10-11am. Interment will follow at  Beaverdale Memorial Park. Condolencesmay be expressed at Colonialfunerals.com.