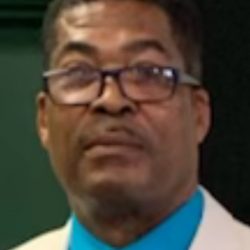 A celebration of his life will be held October 15, 2021, 11:00am at Colonial Funerals, 86 Circular Avenue, Hamden, CT 06514 and interment at Beaverdale Memorial Park his final resting place. Condolences may be expressed at Colonialfunerals.com.

October 3rd, 2021, Natsford Venroy Britton age 63 passed away peaceably at his home in Hamden, CT. Affectionately known as Venroy or “Vennie”, he was born on November 28, 1957, in Saint Catherine, Jamaica, West Indies to the Late Albertine Henry (Jamaica), and Winston Huey, London, England.

Venroy was ambitious and a hardworking man that had many hopes and dreams. He began his travels to America in 1991 and settled in 1999. At that time, he began his career in construction as a laborer in Local Union 445 and later to local union 665. In his 20 years plus career he never missed a day except for extreme emergency, everybody knows he didn’t play with his job. He was dedicated. After his retirement from the construction industry, he began working at the Mary Wade Home until his passing.

He began his journey walking with Jesus Christ in October of 2010, when he was baptized at Union Temple Baptist UFWB in New Haven, CT under the leadership of Dr. D. Keith Kearse. Later he became a member of Our Lord Cometh World Ministry, Inc. under the leadership of Pastor Downer where he served faithfully until his passing. One of his sayings were “Life was not easy at all”, but he kept his Faith in God. Every year he was grateful because he often said he was “Blessed to have reached this far”. His favorite past times were dressing nice, he loved all types of music especially Bob Marley and The Temptations. He also loved watching soccer and basketball and his favorite team, the LA Lakers.

A celebration of his life will be held October 15, 2021, 11:00am at Colonial Funerals, 86 Circular Avenue, Hamden, CT 06514 and interment at Beaverdale Memorial Park his final resting place. Condolences may be expressed at www.colonialfunerals.com