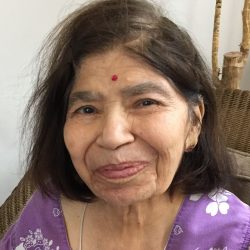 Nirmala Sundaram, formerly of Herndon, VA, passed away suddenly on 15 September 2019, at
Danbury Hospital in Danbury, CT. She was born 6 January 1934 in Tanjore, Tamil Nadu, India,
the fourth child and second daughter of Dr. P. Krishnaswami and V. Sampath. She was a
devoted wife to her husband, Swaminathan Sundaram, whom she outlived by three years.
She leaves a distraught and devoted family: daughter Sheila and son-in-law Erik Altman, son
Krishna Nathan and daughter-in-law Michèle Briançon, and five beloved and adoring
grandchildren, Benjamin and Priyanka Altman, and Neel, India and Maya Nathan.
We are very grateful for the outpouring of loving remembrances and tributes by nephews,
nieces, cousins and friends in India and all over the world. Nirmala, called Nimmi by her
husband and Victoria in her childhood, grew up in Madras (now Chennai). At the age of six she
lost her mother, and was brought up by her father whom she always revered, a blind
grandmother, an older sister and two brothers. She was a proud graduate of Ethiraj College
(undergraduate) and Stella Maris College, where she earned a Masters degree in Social Work
and a scholarship to Columbia University’s School of Social Work for further study. Her family
remembers her many other accomplishments, remarkable for a woman of her time and place.
She participated in the National Cadet Corps, triggering her interest in social work, qualified
for a private pilot’s license (the only one in her extended family, until her son), and was a
prize-winning student of the Hindi language, which she spoke, read and wrote eloquently and
flawlessly. She took great pride in her Tamil Brahmin heritage, and had an unshakable faith in
her religion, and Lord Ganesha in particular. With her diplomat husband she enjoyed
travelling all over the world, making lifelong friends.
Nimmi was kind, loving and generous to a fault. Although not wealthy by any means, she
would literally give the clothes off her back when she met someone in need (“they have so
little and I have so much,” she would say). She and her husband “adopted” and helped several
newcomers and refugees to this country, who became devoted friends. Her joy knew no
bounds when her first grandchild was born; she was an adoring and caring grandmother to all
five grandchildren, taking great pride in their academic, musical and athletic accomplishments.
They will always remember the wonderful “murukku” she made for them, as well as poori,
dosas, idlis and other treats, all made laboriously from scratch.
Nimmi looked after her ailing mother-in-law for several years, and much later in life also cared
unstintingly for a husband with dementia. Her last years were spent at Maplewood Assisted
Living in Danbury, close to her beloved daughter and son-in-law. She was always proud to
have her granddaughter play the violin for the residents at Maplewood, and in her last few
weeks would often be found listening to Mozart.
We will miss her terribly.