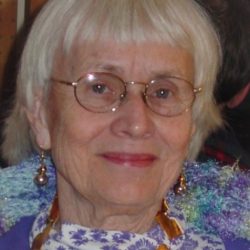 A service celebrating her remarkable life will be held at 2 pm January 11th at St. Paul and St. James Episcopal Church 57 Olive Street in New Haven.  In lieu of flowers, the family invites memorial contributions to the Democratic Senatorial Campaign Committee or the Loaves and Fishes ministry of St. Paul and St. James Church.

Raised in New York City and educated at small Quaker schools before Smith College and Yale Divinity School, Mary Ann Logue was a brave and thoughtful person who was devoted to her husband, family, friends, community and to social justice.  Those close to Mary Ann glimpsed the playful whimsy which complemented her generally serious, caring nature.

Mary Ann Logue’s father, Edward T. Willson, served in World War I and worked in the textile industry as a labor relations manager.  Her mother, Ruth Hawley Rodgers Willson, a 1916 graduate of Smith College, was widowed when Mary Ann was thirteen and worked with European refugees during and after World War II, among other positions.

After being introduced in 1948 with the understanding that neither was interested in a serious relationship, Mary Ann and Frank Logue married in 1950, lived in Trumbull, CT and had three children before moving to New Haven in 1965.   Having been an only child with a widowed mother, Mary Ann cherished her three brothers-in-law, four sisters-in-law, all the close-knit Logue aunts, cousins and kin.

Mary Ann and Frank Logue developed an enviable partnership lasting over 60 years until his death in 2010. In addition to creating a beautiful home, Mary Ann Logue exemplified the cliché that “behind every great man is a great woman”.  Sharing his commitment to the civil rights movement, she supported her husband in leaving a successful law practice and nascent political career in Trumbull to join the War on Poverty in New Haven, CT.

For Mary Ann, like her husband, being an engaged citizen included lifelong involvement in the local Democratic party. She served as the co-chair of the 18th Ward Democrats and opened her home to election-day poll-watching, organizing or strategy meetings, networking and phone banks.    In the 1960s and 70s Mary Ann Logue worked for state legislator Mary Griswold and at Sage Advocate which provided services for the elderly.

After serving as “First Lady” of New Haven 1975-1979 during her husband’s mayoralty, Mrs. Logue felt a spiritual calling.  She completed a Masters of Divinity degree at Yale and was ordained as an Episcopal priest.  She worked as assistant rector at St. Paul and St. James Church in New Haven, Christ Church in West Haven, St. John’s Church in Waterbury and as an occasional celebrant at Christ Church in New Haven.  Reverend Logue enjoyed being in the pulpit and serving as a pastoral visitor.

In her youth, Mary Ann Logue performed as a ballerina before being dropped by her ensemble when she became “too tall”.  She and her husband were both avid readers. They took advantage of New Haven’s many cultural opportunities and enjoyed being part of book and hootenanny clubs.

Mary Ann Logue invested considerable energy and creativity in domestic life.  She took great pleasure in preparing natural, balanced meals and daily homemade desserts.  She loved her gardens and her cats.  Mary Ann Logue was also a generous hostess to friends, family, colleagues and community at her home on Livingston Street.  For over 30 years her Christmas party was a warm and festive gathering where neighbors and friends sang carols, feasted on her desserts and shared lively conversation.

A service celebrating her remarkable life will be held at 2 pm January 11th at St. Paul and St. James Episcopal Church 57 Olive Street in New Haven.  In lieu of flowers, the family invites memorial contributions to the Democratic Senatorial Campaign Committee or the Loaves and Fishes ministry of St. Paul and St. James Church.  Condolences may be expressed at colonialfunerals.com