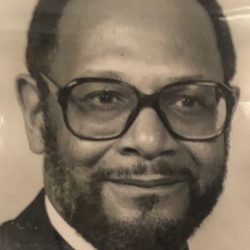 A funeral service in memory of Robert will be held on Friday November 15, 2019 at Dixwell Avenue Congregational United Church of Christ, with Rev. Joseph Bash officiating. Viewing will commence at 8:30 am. followed by the service at 10:00 am. Condolences may be expressed at colonialfunerals.com

It is with great sadness that the family of Robert J. Winters Sr. announces his passing after a long illness on Sunday November 3, 2019 at the age of 80 years. Robert will lovingly be remembered by his wife of 23 years Gail Winters and his children, Robert J Winters Jr., Mark W. Winters, Frank A Winters Sr., and Cassandra Winters. He will forever be remembered by his sister Fannie Jackson, daughters in law Chelsea Winters, Cherev Winters, Roshonda Winters, and by his three grandchildren Chandler D. Winters, Ashley T. Winters and Frank A. Winters Jr.  Robert will be dearly missed by his Cousins Alicia and Ernest Jones, and by his mother in law Nereida Montalvo, sister in law Myrna Montalvo, brother in law Kevin Montalvo, all his extended family in Florida and by a host of other relatives and close friends.

Bob was born in New Haven Connecticut to Joseph and Dorthy Winters.

He received his B.S. degree in Music Education from Morgan State University and his Master’s in Special Education from Southern Connecticut State University. He was a member of the Omega Psi Phi Fraternity. Bob was a teacher of Special Education at Hillhouse High School for 35 years. He served as the school’s co-chairman of the Multicultural Committee and chairman of Black History Month. He was a chaperone for Project M.O.S.T. for 15 years, taking groups of students from Boston to Georgia. Robert was also a chaperone for Ambassador for International Education in 1990, leading students to Lisbon, Portugal and Zimbabwe in Africa. At Hillhouse Bob served as the Assistant Track Coach from 1990-1992. One of his finest gifts to the Hillhouse community was music. He conducted numerous workshops for band members and held school talent shows. Hillhouse was often fortunate in enjoying his performances at school events and related social gatherings.

Bob was a multi-instrumentalist who played the tenor, alto and soprano saxophone as well as the C Flute. In the seventies he founded The Black Elms, a dynamic musical group that played funk and soul. In 1977 he toured Africa with the Alabama Symphony Orchestra and with an international band which performed at the Organization of African Unity Conference in Gabon. He was a guest artist for the Talent Awards of the Arts Council of Greater New Haven. Bob performed with such greats as The Restless Hearts, The Five Satins and Fred Parish. He also taught master classes at Southern Connecticut State University, private lessons in woodwind instruments and at the Dixwell Children’s Creative Arts Center for 20 years.                                                          Bob may best be known to many as the founder of Top Notch Ensemble, a dance band that entertained and captivated audiences throughout the state for over twenty years.

He has held a number of prestigious positions and has received many honors. He was a Fellow at the Yale Teachers Institute, a member of the Board of Directors for the Association for Retarded Children, a member of the New England Educational Evaluation Team for Accreditation and a Proctor for the Princeton Educational Testing Service. Bob received the Superintendent’s T.A.P. Award in 1991 for outstanding contributions to the New Haven Public Schools. In 1998 he received the Louis Williams Award from the Dixwell Community House for educational service to school and community. He also received The New Haven Rhythm, Blues and Jazz Award.

A funeral service in memory of Robert will be held on Friday November 15, 2019 at Dixwell Avenue Congregational United Church of Christ, with Rev. Joseph Bash officiating. Viewing will commence at 8:30 am. followed by the service at 10:00 am. Condolences may be expressed at colonialfunerals.com.