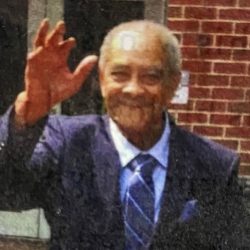 A Celebration of Russell’s life will be held on Wednesday April 20, 2022 at God’s Miracles Unlimited, 1441 Dixwell Avenue, Hamden at 11am. Viewing in Church from 10-11am. Burial will follow at Evergreen Cemetery.

Russell Williams Jr., affectionately known as Rusty, 83, gained his wings on April 12, 2022. He was born to his biological parents, Russell Williams Sr. and Agnes High, in Greensville County, VA but was raised by Frank and Lena Easter in Skippers, VA. Russell started farming at the age of 9 and did so until marrying at the age of 17, at which time he relocated from North Carolina up north in the hopes of creating a better life for himself and his family. He lived in New York, Stamford, and Bridgeport before settling in New Haven, CT. He loved cooking and was known for both his banana pudding and his famous corned beef and cabbage which was lovingly called “red meat and cabbage.” He owned a restaurant in Stamford which he named Roots Pantry as well as a food truck which he named Chicken George. Russell was a hard-working man, taking many jobs such as working at a gas station, a car wash and driving for Eastern Paper for many years – all of this to take care of his family. At one point he went on a job interview with no hope of getting the job and walked out as the FIRST BLACK SUPERVISOR at Phillips Medical Center. He had a love for Cadillacs but his real baby was a white Skylark that he rebuilt with a 455 engine. Russell was a man that loved God and enjoyed studying the Word of God. He was a faithful member of God’s Miracles Unlimited before relocating to Princess Anne, MD. Russell is survived by his children, Linda (Donald) Brown, Russell Williams III, Andre (Shiree) Williams, and Jennifer (Irvin) Draughn all of New Haven, CT, Francine (Theo) Brown of Princess Anne, MD., Gregory (Lisa) Williams of Rocky Mount, NC, Harold (Diane) Williams of Meriden, CT and Erica (Donald) Streater of Hamden, Margaret Shurtleff of Wolcott, CT. Siblings Delores Mixon and Willie Lee High of Gaston, NC, Thomas High of MD and Shirley Manning, the mother of Linda, Russell, Francine, Andre, Gregory, Harold, Beverly, and Erica. He also leaves to continue his legacy 27 grandchildren, 31 great grandchildren, and 5 great-great grandchildren. He is predeceased by his biological parents, Russell Williams Sr. and Agnes High, his parents Frank and Lena Easter, stepfather Thomas High, daughter Beverly Renee McCoy, sisters Juanita Wilson and Louise High, brother  Robert High, daughter-in-law Alicia Williams, granddaughter Alisha Renee Armfield, great grandchildren Jacob Lisbon, Max Lisbon, Noah Lisbon, Robert Kendall IV and twins Matthew and Mia Kendall, also mother of Jennifer and Margaret, Mary Mueller, and best friend George Richardson.

A Celebration of Russell’s life will be held on Wednesday April 20, 2022 at God’s Miracles Unlimited, 1441 Dixwell Avenue, Hamden at 11am. Viewing in Church from 10-11am. Burial will follow at Evergreen Cemetery. Condolences may be expressed at www.colonialfunerals.com