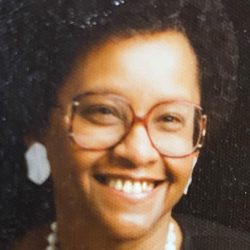 A celebration of life will be held Wednesday December 30, 2020, at Colonial, 86 Circular Avenue Hamden at 11am. Viewing in Colonial from 10-11am. Interment will be held at Beaverdale Memorial Park. Condolences may be expressed at Colonialfunerals.com

On March 10, 1935 a beautiful baby girl was born to Clara Nash Smith and Willie Smith.  They called her Shirley Faye.  She was the youngest of three children.

Shirley was educated in Kansas City, Missouri Public Schools and graduated from R.T. Coles Vocational High School in 1954 where she received her certificate in Cosmetology.

After graduation she married Roy S. Young, and to this union four children were born.  Around 1955 she received a call from her Mother who encouraged them to relocate to Waterbury, CT due to the booming job markets as a result of the floods. After living in Connecticut for several years, they returned to Kansas City, Missouri in 1962.

As her mother aged, Shirley and the children returned to Connecticut in 1968 to look after her. Continuing to enhance her cosmetology skills, Shirley attended and excelled at Mrs. Harrison’s Beauty School. Just a year later Shirley’s career path changed, and she became a Police Officer.  Beginning as a Meter Maid, she worked her way up to become a Matron Officer.

On December 29, 1975, Shirley married Carlton Clarke.  Shirley loved her family and enjoyed being a grandmother and Auntie to many; known for her beautiful and infectious smile.

In 1978 Shirley obtained her Certificate in Real Estate from Stones School of Business. After many years of service, she retired from the New Haven Police Department in 1991.  Upon retirement Shirley decided to return to Kansas City where she would enjoy her early retirement years.

Shirley was a life-long learner and decided to pursue her Associates Degree from Longview College, Kansas City, MO.  In her spare time, she enjoyed crocheting and tending to her two furry companions:  Bear (German Shepard) and Brandy (The Rottweiler).  She also became a foster mother.

After spending 10+ years in Kansas City, Shirley contemplated on returning to New Haven, CT. She was aging and longed to be near her daughter Reneé; in 2005 it was decided that she would return. Being back in New Haven Shirley connected with old friends and they spend their time engaging in laughter, ceramics, and crocheting. Shirley gracefully assumed the role of the Matriarch of her family in the Connecticut area, often attending family gatherings with her children, grandchildren, nieces, nephews, great nieces and nephews.

Early on Christmas Morning God sent an angel to grant Shirley her wings and lead her to her new home and final resting place.

She is proceeded in death by her parents, Willie and Clara Smith, her brothers Leroy Nash and Lawrence Johnson (Geraldine), her husband, Carlton Clarke, and her eldest son, Ronald Young I.

A celebration of life will be held Wednesday December 30, 2020, at Colonial, 86 Circular Avenue Hamden at 11am. Viewing in Colonial from 10-11am. Interment will be held at Beaverdale Memorial Park. Condolences may be expressed at Colonialfunerals.com.