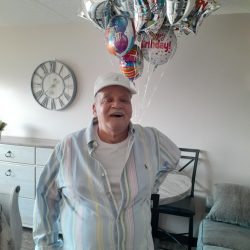 A celebration of Stanley’s life will be held on Saturday August 6, 2022 at 10am at Whitney Avenue Church of Christ 2141 Whitney Avenue North Haven, CT 06473. Burial will be private. Condolences may be expressed at Colonialfunerals.com.

On Tuesday, July 19, 2022, our beloved Stanley Leon Robinson, Jr. (Robbie) age 72, passed away peacefully in his sleep at home (Tower One Tower East) New Haven, Ct. after a brave battle with Dementia.

Robbie was born in New Haven, CT. to Juanita Hilton Ewing and Stanley Leon Robinson Sr., on August 16, 1949. A graduate of Mansfield High School, Mansfield, Massachusetts, in 1967. High school sports were a big part of his life. He was a star athlete in football, basketball and baseball who was part of winning team for his high school. I remember the endless practices, games, tournaments and banquets that he attended. Robbie trained hard so that he could become better and better to help win games for the Mansfield Hornets. He won many awards and trophies for his outstanding performances. Stanley’s grandmother (Isabell Brockington Hilton) also a enthusiastic baseball fan introduced him to baseball when he was younger. She took him to many baseball games at Yankee Stadium in New York City.

Robbie was kind, generous and compassionate, known for his quick wit and his infectious smile. He loved his family. He worried about them, rooted for them, protected them, and forgave them, and always kept on loving them. He wished to be remembered and acknowledge as a loving father, loyal, unselfish, friend, and most of all respected. Outside of sports Robbie loved to listen to jazz. Some of his favorites were Montgomery, Brubeck, Parker, Davis, Coltrane, Monk, Mingus and Blakely. He also loved to listen to the old R&B back in the day of the late 60’s, 70’s and 90’s. His collections of both jazz and R&B were astounding. Robbie was employed at Hartford Insurance Company, Hartford, CT., and American Express in Providence, Rhode Island, as an Account Payable Assistant. He was always good with figures.

He was pre-deceased by his mother Juanita Hilton Ewing and father Stanley Leon Robinson Sr., grandparents O’Donnell and Isabell Hilton.

I would like to give a special thanks to the Dorothy Adler Geriatric Assessment Center, Dr. Samma, Dr. Wang, the staff members at Tower One & Tower East, doctors, nurses, Griswold Home Care, and Emeritus Homecare Center and their special caregivers AJ and David for all their care and support in helping Stanley in his time of need. All of your services were greatly appreciated.

I would like to thank his special friend Carol Taylor for all the telephone calls she made to him about his health and well-being and to just speak with him one on one. Thanks everyone from the bottom of our hearts.

A celebration of Stanley’s life will be held on Saturday August 6, 2022 at 10am at Whitney Avenue Church of Christ, 2141 Whitney Avenue North Haven, CT 06473. Burial will be private. Condolences may be expressed at Colonialfunerals.com.

In lieu of flowers please send donations to: